On the weekend I made a spider model in Blender (it doesn't really look that great, but that's not the point). When I tried to load it into my animation editor it didn't load properly. My collada importer works ok as long as it is just importing a single animation without any bone details. But I want to be able to edit animations in my own editor and that is only possible after fixing the bone offsets and angles by hand and for a spider with so many legs that's extremely tedious. So I looked into alternative model formats for animated models that can be exported from Blender and quickly landed on bvh. I actually used the bvh format in university before, so I am somewhat familiar with it. And it is more suited than collada for my purposes, because it exports the individual angles which I would be able to tweak in my own editor. So I created my own parser for bvh and was able to load a bvh file. However, when I tried to add it to the editor it didn't work as smoothly as I would have hoped. I would need to change quite a few things to get it working properly and I couldn't decide whether I want to break my existing system to try and improve it. Also bvh doesn't store any mesh data or vertex weights to I would still need collada to get that information, which would increase the messiness. There isn't really a nice solution at the moment.

Because I was getting nowhere with my decision about the animation system I randomly searched the web for importing minecraft worlds to Blender and found mineways (link). I played around with it for a little bit and exported a few minecraft models and it works quite well, I may use minecraft in the future to create some models and then tweak them in Blender (it doesn't export slabs, stairs, fences & other non full blocks though). 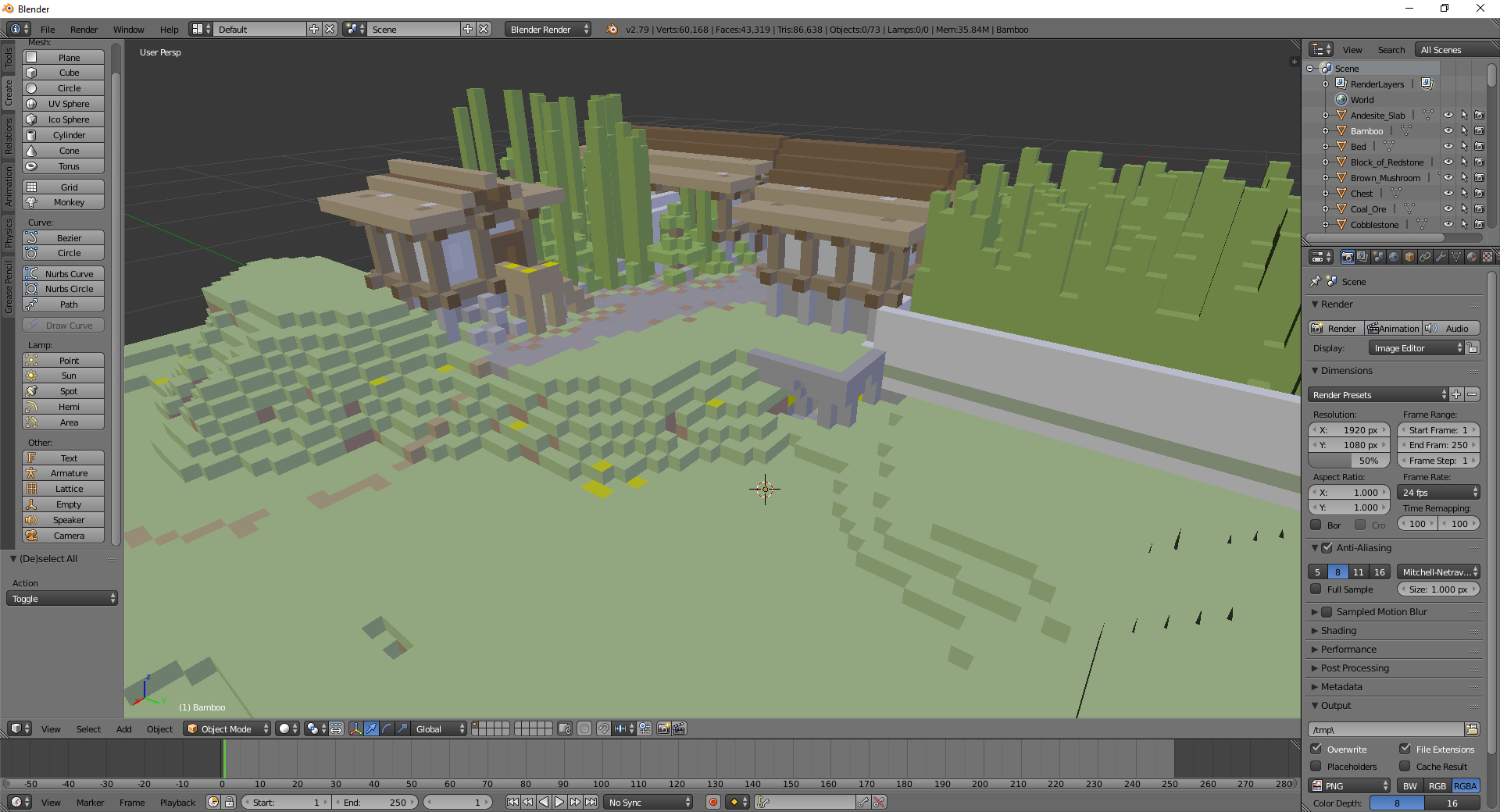 Also it was one of the hottest, if not the hottest, days of the year, so what do you do if you cannot concentrate properly because of the heat? Right, you improve your Raspberry Pi weather system. Right now it has a temperature and humidity sensor attached to it and measures the temperature and humidity. However, for the longest time I wanted to add more sensors to it so it can also measure the outside data, but I never had long enough cables to put sensors outside and I wasn't sure how to get them through the windows and waterproof everything anyways. So today I added the next best thing. I found openweathermap.org which has an API where you can get current weather data for a lot of areas and I created a script that runs once per hour and saves the current weather data in a database. It not only has temperature and humidity data, but also a lot of other weather stats. Some don't seem very accurate, like the cloud coverage or the rain data, or at least the distance between the actual weather station where the data comes from and looking outside into the sky makes a significant difference, but I am saving them anyways.

Today I updated the local website of my Raspberry weather system to include the new data from yesterday. The front page now includes the latest outside data and the daily overview shows every hourly data in a table as well as aggregated stats for the whole day, like averages and minimums and maximums. I also added graphs for every new statistic and made the whole page javascript based so you can switch between the different graphs or show/hide the hourly data without reloading the page. 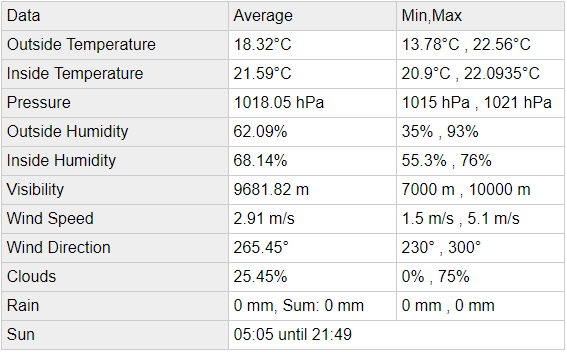 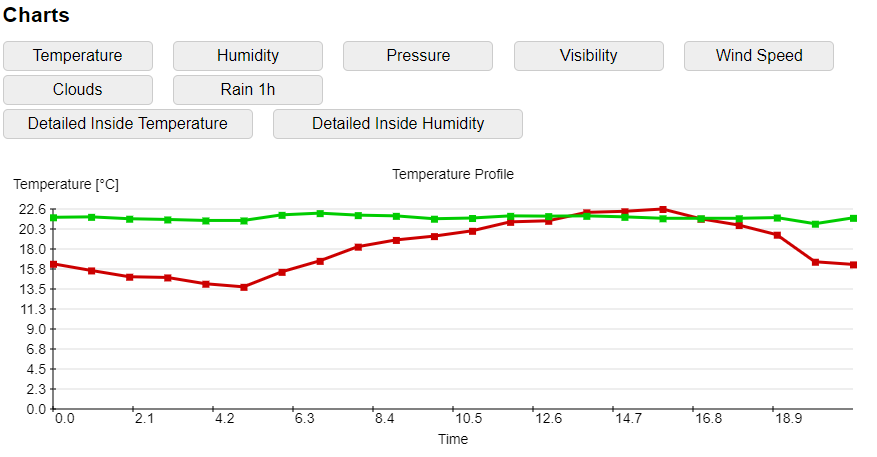 I finally went back to some real game development and added two new towers to the game, the stone stack tower (in lack of a better name at the moment, it is based on the stone stacks that people leave on top of mountains or other sights) and the monolith tower, which are both earth type towers. I also created a new background texture for the player stats ui with my new background texture creation tool. I have to do a pass over a few ui background textures to match them to the newer textures. Then I did a local multiplayer test again, which I haven't done for quite a few weeks, especially not since I added the roguelike mode. As expected there were a few bugs, but overall it worked quite well. I fixed a bug where a tower would be unlocked for all players if one player picked an item that unlocked it. And I fixed another bug where the game would get stuck in the wave game state if a player left or lost the connection during that state. Luckily the selection game states have a timer so there is no way for the game to get stuck in there if a player leaves, but handling the unpredictiveness of internet connections is one of the toughest things. 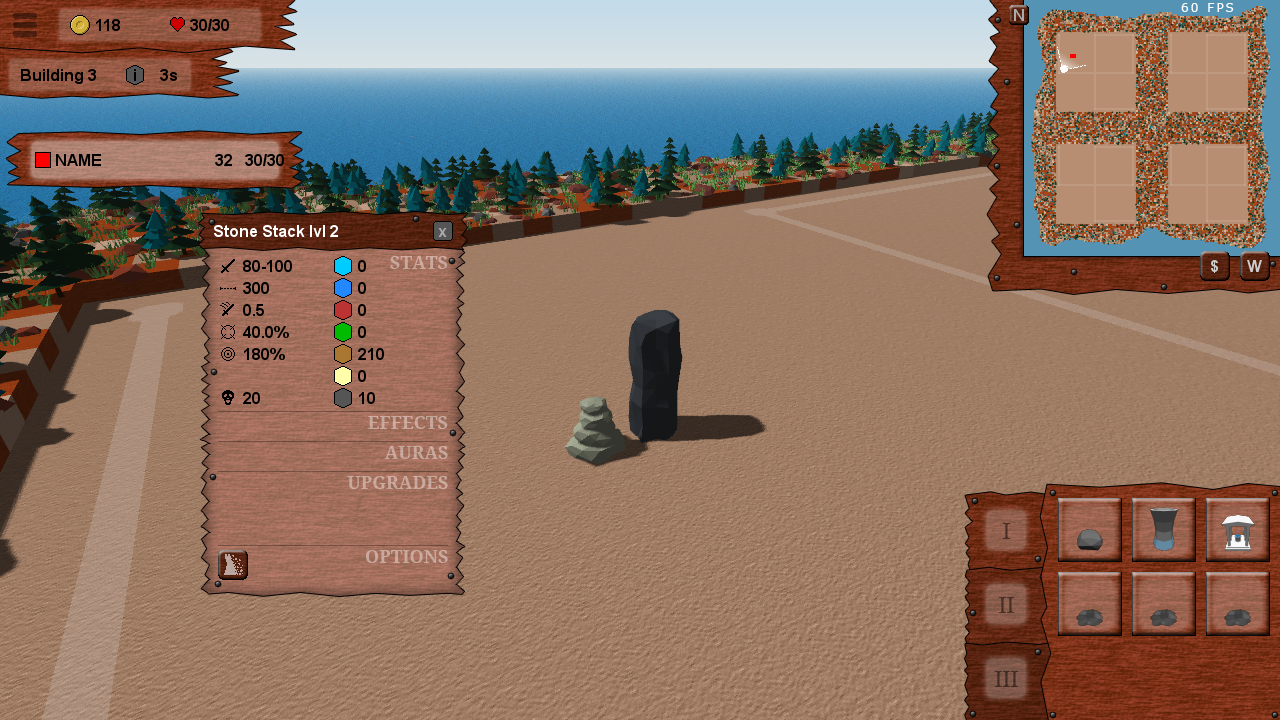