I completely finished last weeks blogpost on Saturday and felt like modeling after, so I created an Icicle and a Snowman tower model and added both towers to the game. I also made a new texture for the main menu buttons and altered the singleplayer lobby a bit. It no longer has a list of players like the multiplayer lobby. Instead I added a back button to get back to the main menu and in the future there will also be some settings for the game. Finally, I removed the wave browser and the shop in roguelike games, because the wave brower was showing incorrect information and has to be replaced with an overview over the generated run later and I am not sure whether I want the shop to be there or not.

Previously every mob only took one life when it reached the last waypoint, so I changed the wave generator to create some variation and scaling difficulty in the number of lives lost and the amount of gold recieved after completing a wave was also hardcoded before and is now generated. I don't think it is really balanced at the moment though, it will definitly need some more tweaking. To show these values to the player I updated the wave selection ui and the wave details window to include them. Then I added little numbers next to the building group buttons to indicate how many buildings are in the group, because if a new building would be unlocked in a different group there was no way of telling where it was and whether it actually unlocked. And if a building is unlocked, but its group is already full, it will automatically be moved to a different group. If there are more than 27 buildings unlocked, the building will not be added at all, but I don't think there are going to be that many buildings unlocked in the same game. Then I fixed a few bugs in the game over detection, the game was still using the wrong number of total waves and it didn't stop if the player was eliminated.

The first thing I did today was to add a new feature to the game. The player can now indicate that he is ready after building by pressing a new button in the game state ui. This allows for longer building phases to give the player time to think about the placement of his towers, while not slowing down the game by waiting a long time when there is nothing to think about or the player has no gold to build anyway. I also updated the top left ui, so it now includes the number of eliminations of the player and added an option to hide the multiplayer stats (they are always going to be hidden in singleplayer games, because they are redundant with the top left ui). Then I went on a texture updating spree and made new textures for the top left ui, the ready button, the wave details window, the entity window, the minimap background and the selection uis, so they all use the new stlye with the darker shade near the edges. 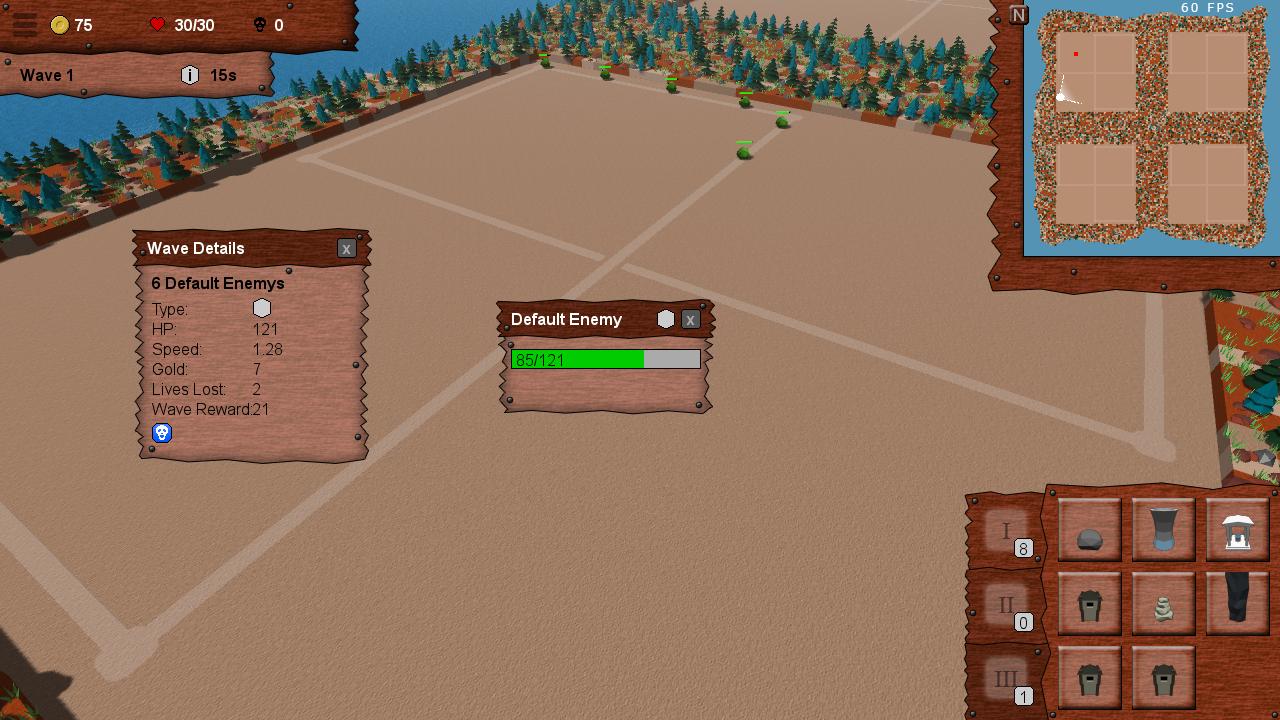 Today I finally added a game complete popup, there was no way of telling that you won before :D. And I also created a background texture for it and the game over ui, as well as nice textures of the Victory! and Game Over! texts. Then I did the tedious task of converting the wave generation algorithm from normal rng to the seed based random number generator, so it will always create the same run from the same seed. 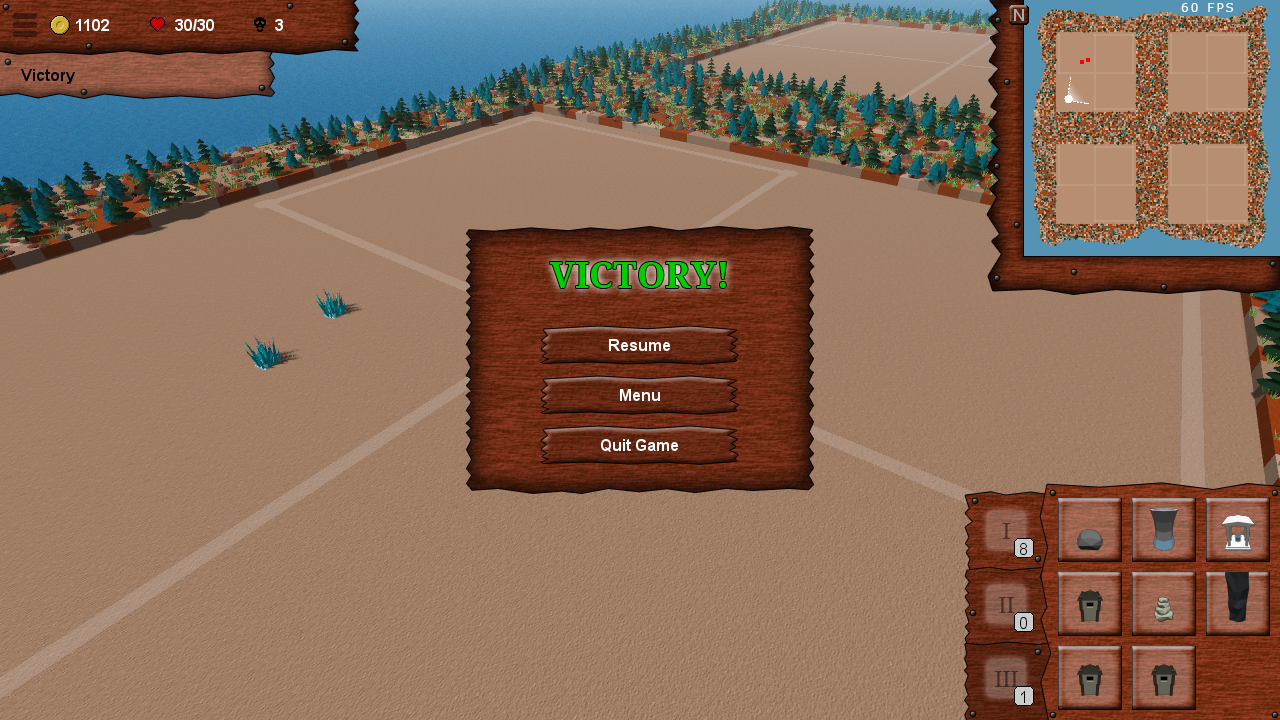 The map I am always using has waypoints and a path between them directly in its textures, but I don't want to do this for all maps, especially when there can be a number of different waypoint layouts on the same map. So instead I made a little waypoint stone model in blender and some textures with roman numbers on them for it. However, so far textures were referenced via path in the model file, which is annoying when copying files around. Therefore I added a new feature to my model files: textures directly embedded in the file. It took some time to update the file format and the model viewer/editor, but in the end it turned out quite well and it is going to save a lot of hassle for textured models when moving the files. I saved the waypoint model once with each texture and then created a new class in the game which handles the creation and rendering of the waypoint models. 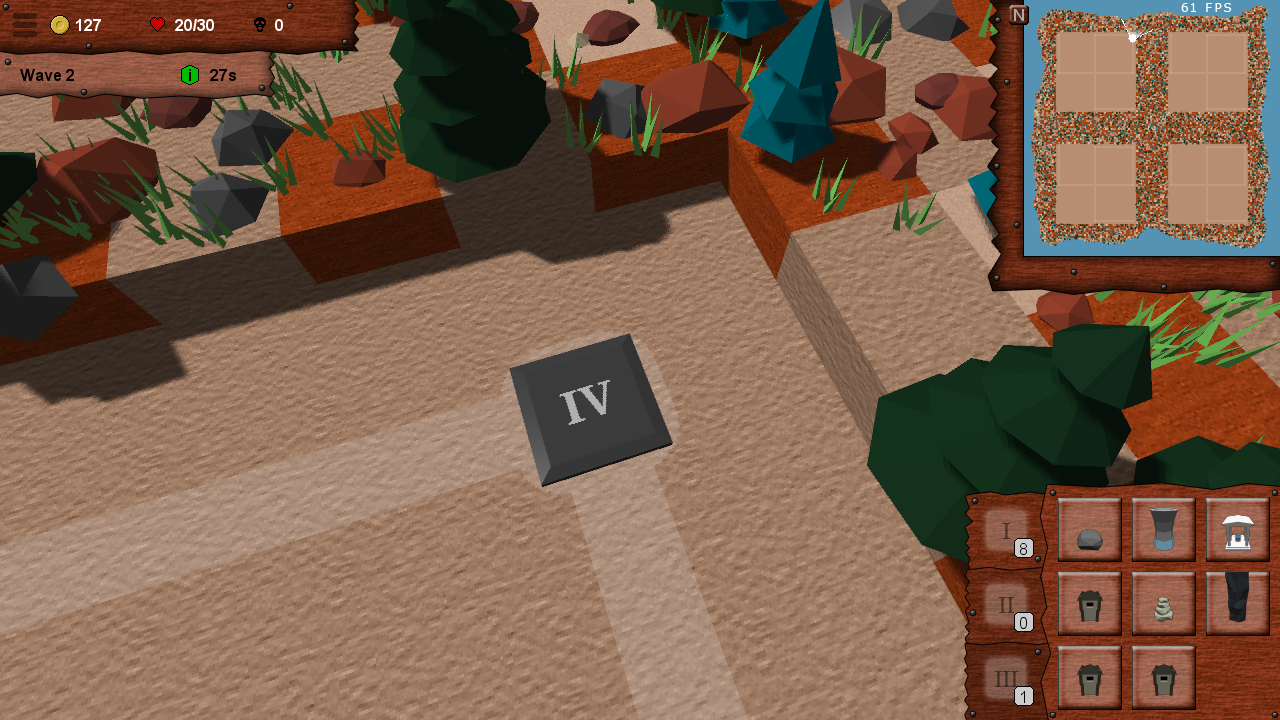 A little bit of a slow day, I only got around to adding different target types for towers, like ground only, air only and boss only. And I also fixed non rng crits which were broken since I changed the stats component and the combat system.