GameDev 49: A lot of Blendering

I was feeling the Blender itch lately and I still need more animated models for my game, so I started the new week by creating a goblin model. Organic shapes are always a lot more tricky to create than non organic ones, so it took me a bit until I was happy with the shape of the goblin. In addition to that the goblin also needed to be animated. I wanted the goblin to do some kind of hop skipping and jumping type motion, so I spend an evening trying to slowly hop skip and jump through my room in order to figure out how the movement could be broken down into keyframes and match it to the goblin. In hindsight I should have filmed myself and used the footage, but I only thought of that when I was almost done. 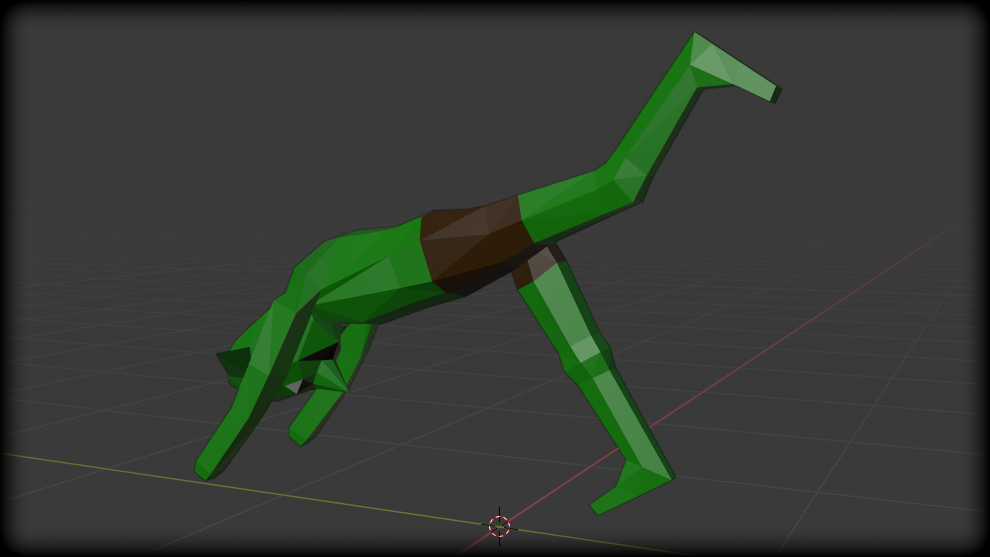 Then I converted the goblin to my own model format, made the different elemental variants and added it into my game. When I added it to the game I realized that the loading of animated models could use a few improvements. Firstly, there were still 2 models that were using my older animated model format - the squirrel and the bird. I don't want to use those in the final game, because I want the enemies to be mostly fantastical creatures, or at least animals that a lot of people do not like - like the spider or snake model, I personally don't mind either, although I might feel differently if I was living in an area with poisonous spiders and snakes. Anyway, I don't want to use the squirrel and bird, so I just removed them from the game. And with them gone, I was able to remove all the code that was necessary to handle the two different animated model formats. Secondly, all animated models were loaded when the game is started, which was fine in the beginning when I only had a few models, but with more and more models this seemed like a bad solution. Instead I changed the code, so an animated model is only loaded when it is actually needed. Depending on the type of harddisk, this may cause a few milliseconds delay in a frame, but for a strategy game this isn't really that much of an issue.
The only old animated model that I still wanted to use was the slime model, so I updated it to Blender 2.8 and then converted it to my new animated model format and created all elemental variants. I also made the elemental variants of the pterodactyl model, because it was still missing them.

I had the idea of creating a mushroom tower for my game that can be upgraded to different types of mushrooms. Therefore I made a bunch of mushroom models in Blender. 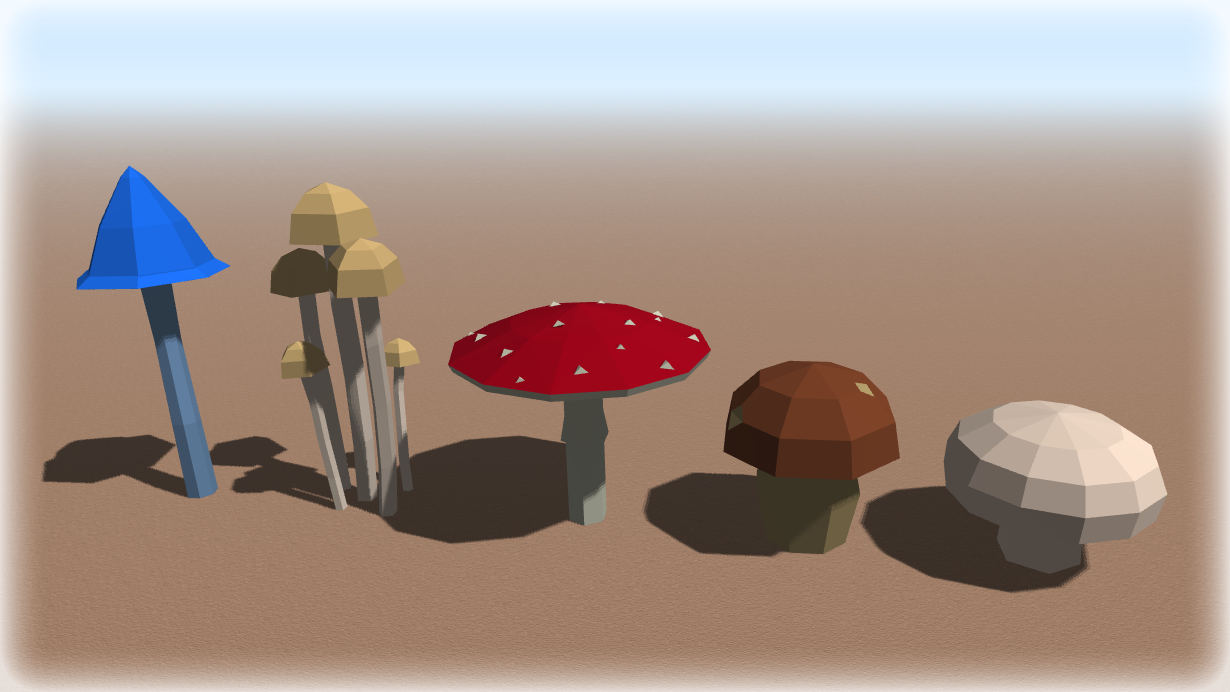 Probably the most iconic mushroom is the fly agaric, but I had never heard of the english name for it and I don't really like it, I prefer the german name "Fliegenpilz", I'm not sure how I am going to call it in the game, but it is definitely going to be anti air, because both the german and english name have fly in it. In any case the mushroom models also double as very nice environmental deco models. I made all the mushroom models with a similar method and for some reason Blender decided it was a good idea to face all the normals inwards. I had this issue previously and for the longest time I always checked the normals before exporting, but it didn't happen for a long time, so I didn't check it this time and only realized the normals were messed up when I placed the models in the editor, so I had to reexport and reconvert all of them.
I really enjoyed making the mushroom models and was in a general Blender mood, so also finished the stave church model I had started a few weeks ago. 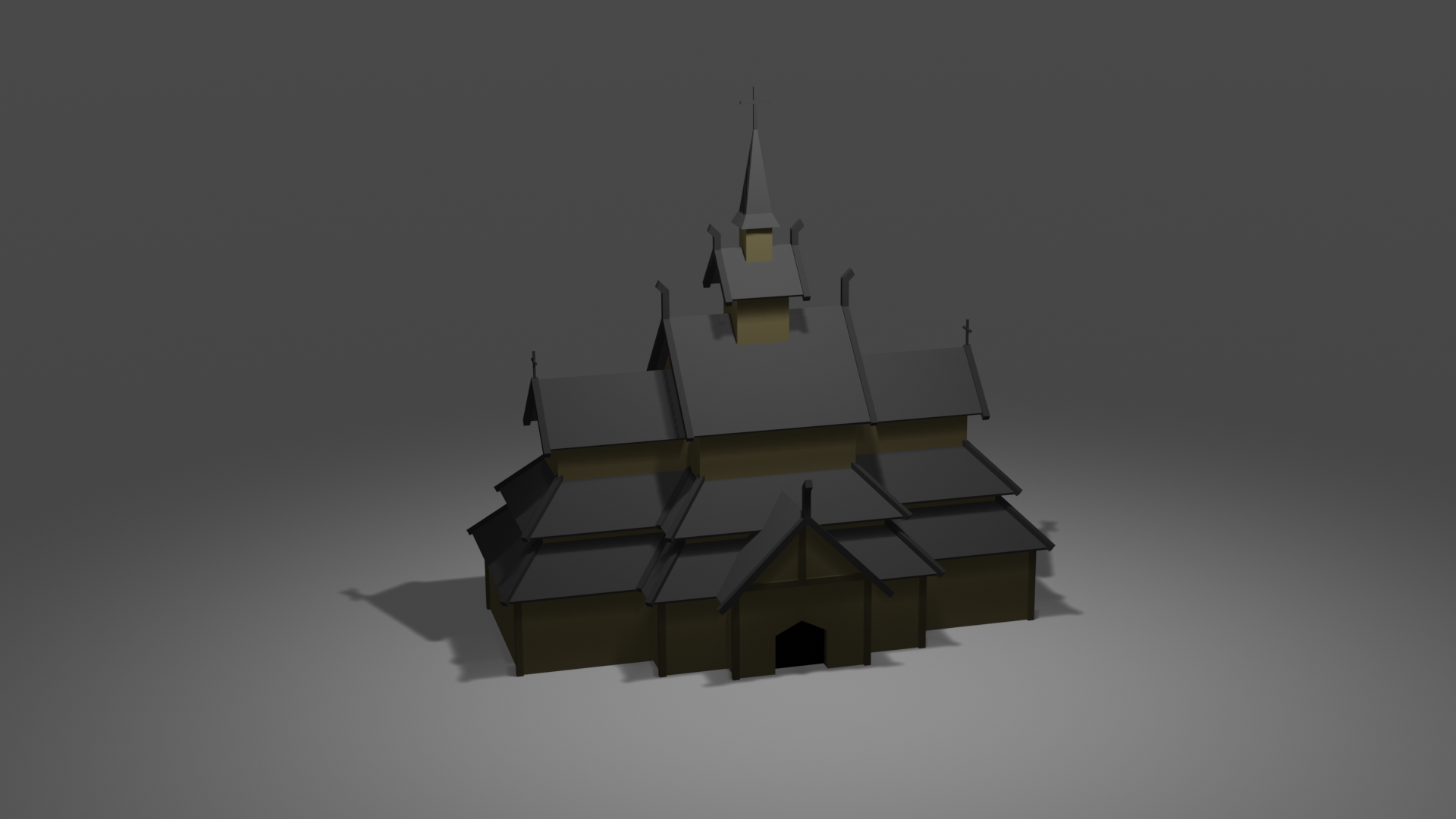 And finally I made a haunted mansion model, that is also going to be a tower in the game. I filmed the creation of it and turned it into a timelapse: